Which Filipino priests and nuns would vote for Marcos Jr? – UCA News 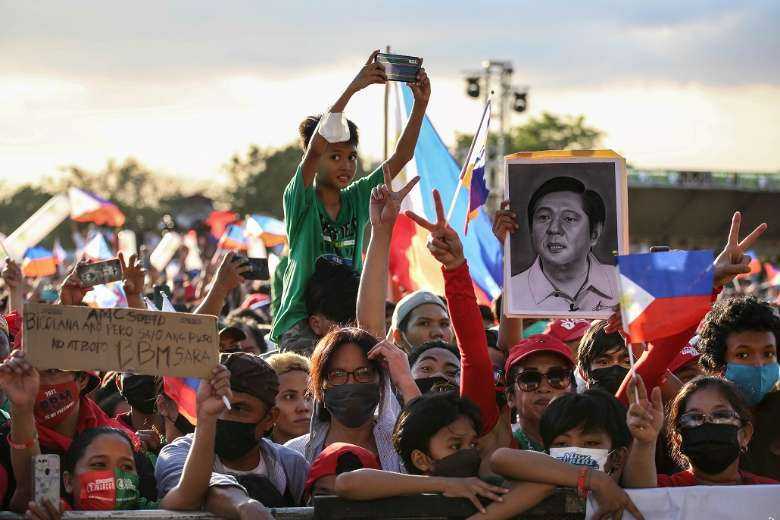 Supporters of presidential candidate Ferdinand Marcos Jr. attend a campaign rally on April 24 in Taguig, suburban Manila, ahead of the May 9 presidential election. (Photo: AFP)

With just a week before the May 9 presidential election, the Catholic Bishops’ Conference of the Philippines (CBCP) has exerted all efforts in the performance of its pastoral and prophetic duty to remind the nation of the grave consequences of the return of the Marcoses to Malacanang, the president’s official residence in Manila.

Given this, it might be interesting to know who among the Filipino priests and nuns would vote for Ferdinand Marcos Jr. come May 9.

In the 1970s and 1980s, there were members of the clergy, including a few high-ranking leaders of the Church, who did not oppose Marcos Sr. and his martial law. American writer Robert Youngblood in his book Marcos Against the Church said that the late Julio Cardinal Rosales of Cebu and Archbishop Teopisto V. Alberto of Caceres, both CBCP presidents during martial law, appeared to have defended Marcos.

I also recall the story of Monsignor Domingo Nebres, the Catholic chaplain of Marcos Sr., who remained a Marcos loyalist until the Filipino dictator died in Hawaii in September 1989.

The dictator died three years after the Marcoses were expelled from Manila through the EDSA People Power Revolution in 1986. His remains were brought to Hawaii’s largest church, the Co-Cathedral of St. Theresa in Honolulu.

Before the burial, Monsignor Nebres gave a eulogy where he insisted that Marcos was similar to Jesus Christ, who “was a victim of people power,” referring to the 1986 EDSA Revolution.

Those in attendance, all Marcos loyalists, were pleased, but what he said totally shocked the Catholic world, including the local bishop and clergy

The Ilocano dictator, in the good monsignor’s opinion, was a redeemer of a nation stabbed by disloyalty, a leader “betrayed by his own people, like Jesus Christ.”

Those in attendance, all Marcos loyalists, were pleased, but what he said totally shocked the Catholic world, including the local bishop and clergy.

Bishop Joseph A. Ferrario of Honolulu reprimanded Monsignor Nebres in a written statement, branding the latter’s eulogy as “ridiculous, absurd and an insult to the Filipino people.” That written statement is archived in the diocesan chancery.

That was in 1989. In the forthcoming May 9 presidential election, Marcos Jr. is the frontrunner. Are there pro-Marcos clergy and nuns, supposedly moral leaders well formed and informed about the moral dimension of politics, who would still choose a candidate perceived to symbolize the opposite of the qualities and virtues the Church holds dear?

Of course, we cannot question their personal preferences. But the question begs an answer: Do they keep a different set of moral principles from the rest of the Filipino bishops priests and nuns? Only God knows.

Remember, in 2016, some 16 million Filipinos, including a good number of Catholic clergy, voted for somebody — still a presidential candidate at that time — who got stuck in heavy traffic in Manila during the papal visit in 2015 and cursed Pope Francis.

The ordained clergy, seminarians, religious nuns and brothers are mobilizing themselves in favor of the presidential candidacy of the main rival of Marcos Jr. This is what is publicly perceptible before the election. At one point, piqued and threatened, the Marcos camp insisted that the Church should stay out of politics and not get involved.

The Clergy for the Moral Choice recently released a public statement — signed by more than 1,000 bishops and priests from all over the archipelago — and pledged their massive support for Leni Robredo.

It’s no longer a question of whether or not the clergy can endorse a particular candidate but a question of why the Church’s opposition to Marcos Jr. is publicly and passionately manifested

They said that “of all the presidential candidates that could prevent the return of the family who caused us misery and pain, no one can surpass the potential of Vice President Maria Leonor Robredo.”

The following paragraph from the same public statement caught my attention: “Our country is in danger of being ruled by those who made her suffer. The son and heir of his father, who ruled us for a long time … Are we gullible enough to believe their fake smiles, words and promises?”

Marcos Jr., who has kept his huge lead in the presidential race according to opinion surveys, is slammed for standing tall on a name that resounds but who, as observers say, cannot survive without his father’s shadow and without the aid of the ill-gotten wealth. He is equally disparaged for lying about his Oxford graduate diploma and other credentials, and for using an army of trolls to discredit rivals and revise history.

Moreover, Marcos Jr. and Imelda Marcos wilfully refused to pay the tax of the Marcos estate, which legal experts say can be charged criminally by the Department of Justice under Section 255 of the Philippine Tax Code.

In fact, acting on a filed resolution on April 3, the Senate called for an investigation of the 203 billion pesos (US$3.9 billion) in estate tax liabilities of the Marcos family.

So, when the Clergy for the Moral Choice says that “our country is in danger of being ruled by those who made her suffer,” it is not an empty warning.

It’s no longer a question of whether or not the clergy can endorse a particular candidate but a question of why the Church’s opposition to Marcos Jr. is publicly and passionately manifested.

About 80 priests from the Archdiocese of San Fernando, Pampanga, clergy of Legazpi, Bataan, Batangas and Bukidnon dioceses have expressed their support for Leni Robredo. Nearly all members of the Catholic Educational Association of the Philippines (CEAP) at college and university levels led by Ateneo and La Salle did the same as other dioceses, and universities are following suit.

The Church seems to own what Edmund Burke said — “It’s enough for good men and women to do nothing for EVIL to spread!” — and assumes the solemn duty to be the voice of the voiceless

The Council of the Laity of the Philippines (Laiko), the Couples for Christ international council and more than 500 members of Pari Madre Misyonero Para Kay Leni, among others, have expressed their preference for a political candidate in an unprecedented way.

Canon law forbids clerics from actively involving themselves in partisan politics. But there’s an exception to canon 287 section 2: UNLESS, “in the judgment of competent ecclesiastical authority, the protection of the rights of the Church or the promotion of the common good requires it.”

Suddenly, for the “the promotion of the common good,” Filipino bishops and priests have decided to be silent no more. Even the 18th Congress of the Senate of the Philippines, a government institution, released a press statement on April 23 which says that “for first time in Philippine Catholic Church history, priests openly support candidates.”

Teddy Santiago of Laiko told UCA News the principal reason why this is happening. It’s because the May elections are crucial, although “crucial is an understatement,” he said. “It is an emergency situation. It might be now or never.”

The Church seems to own what Edmund Burke said — “It’s enough for good men and women to do nothing for EVIL to spread!” — and assumes the solemn duty to be the voice of the voiceless.

How strong is the Church in the Philippines? She has more than 120 active bishops, 10,470 priests, 11,000 religious nuns and brothers and about 80 million lay Catholics.

* Jose Mario Bautista Maximiano is the author of ‘Catholic Social Teachings in Contemporary Philippine History: 500 YOC’ (1971-2021), Volume Three (Claretian, 2022) and ‘MDXXI: 500 Years Roman Catholic’ (Claretian, 2020). The views expressed in this article are those of the author and do not necessarily reflect the official editorial position of UCA News.