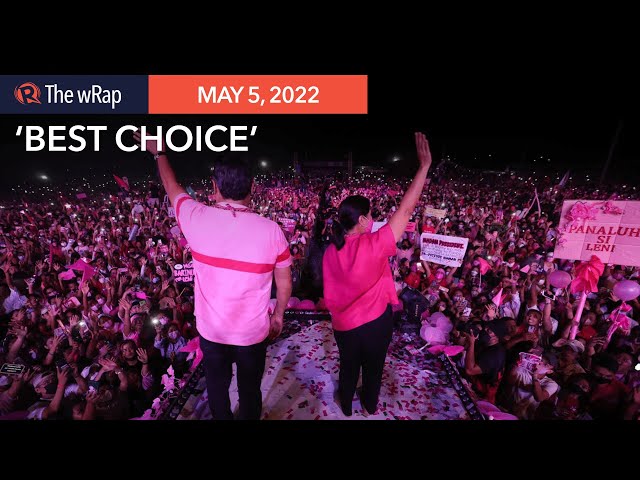 MANILA, Philippines – The Leni Robredo-Kiko Pangilinan ticket has received another rare religious endorsement just days before the May 9 polls – this time from one of the country’s largest Protestant churches.

In a statement issued May 1, the Council of Bishops of the United Church of Christ in the Philippines (UCCP) endorsed Robredo and Pangilinan as the “best option for the Filipino people.”

The UCCP bishops said their decision was borne out of their “collective discernment, which may be used for moral guidance.” But they emphasized that ultimately, “the choice is still left with the individual believer.”

“In choosing them, we are guided by our awe-inspiring commitment to herald the truth and be by the side of the most oppressed and vulnerable sectors of our society,” the bishops said.

In order for Robredo and Pangilinan to “successfully push through with their pro-people agenda,” the UCCP bishops also endorsed the following senatorial candidates:

The UCCP, formed in 1948 after the union of several Protestant churches in the Philippines, has been known for its progressive stance on issues of social justice. It currently has over 3,000 local churches and congregations as across the country.

“As a Church, we were among the first religious groups that denounced the proclamation and ill-effects of martial law in 1972. We were among those that [accompanied] the struggle of the people in calling for the lifting of martial law and emphasized the Church’s Declaration of Principles and faith imperatives in its opposition to oppressive and repressive laws imposed by the dictatorship,” the bishops said.

On May 4, Robredo and Pangilinan also received the endorsement of the “Clergy for the Moral Choice,” a group of more than 1,200 Roman Catholic bishops, priests, and deacons.

Last February, a group of 500 Catholic priests and nuns, as well as several religious congregations and lay groups had also voiced their explicit support for the ticket. These statements of support represent a break in a long-held tradition within the Catholic Church in the Philippines that discourages outright support of specific candidates.

This is in contrast with the Iglesia Ni Cristo (INC), which practices bloc-voting as a mark of their church’s unity. The INC leadership formally endorsed Ferdinand “Bongbong” Marcos Jr. and Sara Duterte on May 3. – Rappler.com