Tumauini came into being as a midway stop between Ilagan and San Pablo along the Cagayan River. The Dominicans, who had jurisdiction over the entire Cagayan Valley, established it as a mission post in 1707. As river traffic increased, Tumauini grew in importance until, in 1749, the principalia (elite) thought it fit to petition the authorities to declare the settlement a town. The parish itself was founded in 1751. Tumauini was briefly the capital of the province of Isabela, created in 1856. 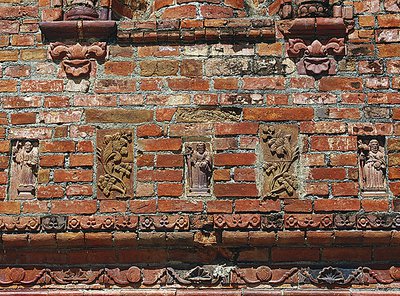 A provisional church was erected in 1707. In 1759 and 1771, the townspeople attempted to rebuild the wooden church but were stopped by authorities. In June 1783, the people petitioned Manila to let them build a stone church since, by this time, the existing church was not only too small but near collapse. In September 1783, government approval was finally given. By this time, however, the townspeople, having anticipated government approval, were well into their third month of construction. Brick insets on the inner and outer walls are marked with the years “1783” and “1784”. Excavation and settling of the foundations may have begun even earlier.

Work on the church was led by the Dominican vicar of Tumauini Domingo Forto and the alcalde de naturales or mayor Pablo Siason. They were reportedly aided by a mason, named Castillejos, from Lal-lo, Cagayan. While kilns and lime were constructed, bricks may have come from Tuguegarao, Cagayan. Carvers from Pampanga helped make the decorative brick insets used throughout. Brick making was most developed in the Cagayan Valley. Moulded, numbered, dated, and signed bricks distinguish a certain technology that runs throughout the churches built in the late 18th century by Dominicans in the Cagayan Valley. A charcoal-black 1783 brick on the facade appears overcooked, witness perhaps to experimentation in firing temperatures. By such practical experience, Dominican-fired brick walls in Cagayan exhibit much less wear and tear even without protective layers of palitada (stucco or lime plaster) unlike Ilocos and Pangasinan churches whose bricks erode if the palitada were removed.

The church complex is still almost complete. The patio is fenced off by a sway back wall with alternating crests. In the center of the patio is a dilapidated wooden cross on its brick base. The convento stands in ruins to the church’s left, destroyed by an earthquake in 1863 and further damaged by bombs during World War II. The remains of a larger church with a brick arched vault can still be seen.

The facade is a fanciful variation of the silhouette first utilized in Tuguegarao in the 1760s. But instead of a triangular pediment, it has an arched wall that echoes the shape of the circular window meant to light the choir loft. This semicircular pediment is flanked by finials and volutes. Its shape is repeated in the curious wheel decorations, resembling stone wheels in Hindu temples, on the facade’s base. Scrolls and volutes ornament the outer edges of the facade. The individual brick pieces for these decorations were numbered before firing to ensure proper assembly. A pair of niches house images of Dominican saints in stone, themselves rare examples of sculpture in this material. All over the facade and on the exterior and interior walls are molded-brick decorations depicting flowers, leaves, saints, scallops, religious symbols, and other fanciful motifs. To the facade’s right is a unique cylindrical bell tower, which reached the height of the church in 1805 and must have been completed soon after. It is unique for at least three reasons: its round plan is not seen elsewhere except in Itbayat (Batanes), Borongan (Eastern Samar), and San Francisco, Naga City (Camarines Sur); the brick artistic elements are left exposed, to contrast with the rest of the walls covered with lime plaster; and the decorative scheme is a delight by itself, with swags, festoons, hearts, pineapples, and the so-called egg-and-dart motif with the “darts” left out, making it look like a huge wedding cake. 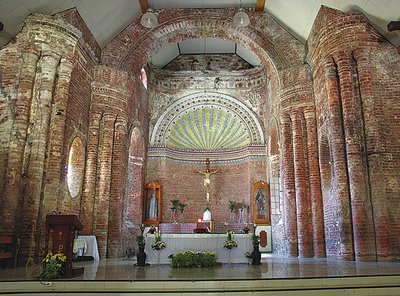 The interior, although heavily damaged, retains its otherworldly aura. The sanctuary is marked off from the rest of the nave by an expansive arco toral (semicircular arch). Bright light from elliptical side windows immediately draws attention to this area, dominated by a huge scallop of brick. Behind the apse is a buttress, pierced by a narrow passageway, thus making it look like a flying buttress. A similar pair of buttresses can be seen supporting the apse of Santo Domingo Church, now in ruins, in Piat, Cagayan.

The brick convento was greatly damaged by the earthquake of 1863. Parts were demolished by Fr Juan de Dios Rico, 1867-72, who had to bring in prisoners from Ilagan because of strong opposition from the residents. What was rebuilt by Fr Alejandro Sarralde, 1872-78, was destroyed by a typhoon in 1884. Fr. Jose Brugues, 1883-89, continued the rebuilding and replaced the tile roof with galvanized iron. Despite its present ruined condition, there are amazing survivals. Over what must have been the dining area is a curved masonry ceiling, technically called a barrel vault. Such solid vaults are rare in the Philippines, and the majority of Filipino examples are found in the Cagayan Valley. In Tumauini alone, there are three: the largest, over the dining area (the refectory), another over the hallway linking the convento to the church, and a small one over a portion of the sacristy. Notable also are the impressions on the palitada or lime plaster of the vault which show that the wet plaster was held up by mats of sawali. At the end of the dining area is the kitchen, surmounted by an impressive quadrangular brick chimney.

Much of this legacy of intricate brick architecture perished when Allied forces bombed the towns along the Cagayan Valley in 1945. They were ostensibly mopping up Japanese troops, whereas by this time the Japanese had already vacated the area and were holed up in Ifugao. In Tumauini, the townspeople trustingly stored their pianos in the church. Legarda ruefully notes, “Musical life in Tumauini has not been the same since the bombing.” Fr Forto’s 1790 bell resembles a giant sieve due to Allied strafing of the belltower.

Tumauini remained a magnificent ruin, like numerous other Cagayan Valley churches, for many years after 1945. Hollow blocks filled in the gaping holes on both sides of the nave. The rose window on the facade was reconstructed as best as the people could at that time. The old convento was not rebuilt, and a new one rose instead in a corner of the patio. Notwithstanding this series of misfortunes which have not ended—in October 2010 Typhoon “Juan,” as it devastated the Cagayan Valley, unroofed a third of the church—the Parish Church of San Matias in Tumauini, Isabela is the masterpiece of brick architecture in the Philippines. In the Cagayan Valley, where bricks were produced so well they outlasted those in other regions, Tumauini represents the height of brick technology in colonial Philippines, in terms of both durability and design. Added to this attainment are unique details such as the round bell tower; the sanctuary with its half-dome altar, oval windows, and curved corners; the kitchen chimney; the three barrel vaults; and the sawali impressions on the palitada.

The Tumauini Church, with its highly decorative facade, cylindrical bell tower, and festive brick decorations, is one of the Philippines’ most important historical landmarks. The uniqueness of Tumauini church and its hallowed grounds were finally recognized when it was declared a National Historical Landmark by the National Historical Institute in 1989. The two iron plaques, however, were thoughtlessly applied over the brick insets of the facade. The National Museum in turn declared it a National Cultural Treasure on 31 July 2001.