Frs Juan de la Plasencia and Diego de Oropesa first preached the Christian faith in the Tayabas region in 1578. Between 1580 and 1585, a bamboo, nipa, and anahaw camarin or granary-type church was built and placed under the patronage of San Miguel Arcangel. Following the 1590 visitation of Fr Pedro Bautista, superior of the Franciscans in the Philippines and later a martyr in Japan, an order was issued that all camarin-type churches be replaced with structures of wood. 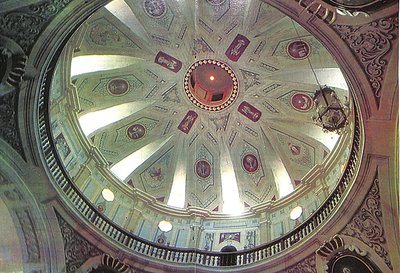 It was not until after 1600 that a stone church was built in Tayabas. In 1721 the church roof was repaired, and in 1736 a wall was built around the mission complex. The church was severely damaged by an earthquake in 1743, probably caused by or simultaneous with the eruption of Mt Banahaw that year. It was subsequently rebuilt on a grander scale on the same site. In 1746 the wall was fortified by adding a meter more of mortar. Four years later, its height was increased. In 1761 a two-story facade crowned by a triangular pediment was constructed. In 1768 the church’s nipa roof was replaced by tiles, and the dome over the main altar was built. In 1771 a wooden barrel vault was constructed. From 1855 to 1860 a transept with rounded ends and circular crossing was added to the church. In 1858 the construction of the cupola over the crossing began, and a third story and semicircular pediment was added to the facade.

Completed on 1 November 1860, the church was blessed on 11 November by Fr Jose Urbina Esparagos, OFM, parish priest. In 1864 the interior walls were covered with stucco as a ground for decorative painting. The following year, the church acquired a pipe organ assembled by Telesforo de Lavarez from Pasay. In 1873 a new sacristy was added to the transept. In 1894 the church roof of tile was replaced by galvanized iron.

In 1925 the church interior received another set of decorative paintings, done under the supervision of Victor Flores. World War II left the church unscathed, although the convento, converted into a garrison by the Japanese, was damaged by bomb shrapnel. In 1946 a wooden communion rail was built for the main altar. In 1964 the wooden barrel vault was covered by a second ceiling of lawanit to prevent old paint and debris from falling. In 1984 Fr Froilan Zalameda began supervising repair and restoration work on the church.

After many renovations, the facade style is best described as eclectic. The older triangular pediment can still be seen where the joints of the new and old facade meet. The three-story arrangement is unusual for Philippine facades, more often with two stories. The main entrance in the mudejar style, similar to the entrance of the Santo Niño Basilica in Cebu, is flanked by two niches. Above the first story are the windows of the choir loft, and above this is the third story decorated by niches. The divisions between stories are marked by pairs of horizontal bands. The niches contain images of angels, San Francisco, Santo Domingo, and San Diego de Alcala.

The bell tower of three stories of unequal height—the third being the tallest—was built following a quadrilateral plan. It stands on the epistle side of the church. It is crowned by a pyramidal roof and pierced by windows on each floor.

The church plan resembles a key. The baptistry, to the right of the entrance, is on the first floor of the bell tower. It contains a retablo, depicting the baptism of Jesus. The wooden barrel vault and cupola of the church, painted with blue, maroon, beige, and white, depict symbols of the Passion of Jesus and mystical titles of Mary. Seven altars in the neoclassical style are found in the church. The main retablo, dedicated to San Miguel, is crowned by symbols of theological and cardinal virtues. The central portion bulges outwards, an echo of the rounded transepts. The altars on the gospel side are for San Jose, the Mater Dolorosa, and Maria Assumpta. Those on the epistle side are for the Immaculada Concepcion, San Diego, and Navidad. The sacristy’s retablo in the rococo style, similar to that of Tanay, contains the images of the Inmaculada, Santa Clara, and a 20th-century image of Santa Teresita.

Sensible restoration, especially of the ceiling, has made Tayabas a resplendent example of a colonial church. However, the construction of two contemporary edifices along the flanks of the church destroys the vista of the nave.

While the ceiling had been restored and repainted by the 1990s, by around 2013, damage on the ceiling was evident. Because it was made of wooden planks, it began to deteriorate. A fund campaign was organized to conserve the church. In 2014 work began on the ceiling with its wooden planks replaced with new ones. The planks running from the door to the sanctuary were replaced. Conceivably, once the repairs to the ceiling are completed, the ceiling painting will be recreated.