Santa Ana was the first settlement outside Manila to be evangelized by the Franciscans. Called Sapa by the Tagalog, the settlement, which for centuries had traded with the Chinese and Arabs, stood at the confluence of the Pasig River and an estero (canal), called sapa, a Tagalog word for stream. In 1966, archaeological diggings in the courtyard of the Santa Ana Church and its surroundings uncovered burial sites rich with artifacts and tradeware dated to the Sung Dynasty, 1127-1279. These indicate that the settlement had achieved a high level of sophistication prior to the coming of the Spaniards. The first Franciscan provincial in the Philippines, Pedro de Alfaro, sent Juan de Plasencia, OFM, Diego de Oropesa, OFM, Juan de Garrovillas, OFM, and Francisco de Santa Maria, OFM, to convert the Tagalog of Sapa. In 1580 the Franciscan chapter appointed Pablo de Jesus, OFM, as first resident minister of Sapa. 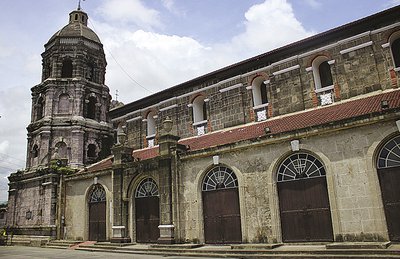 The first church of bamboo and nipa was dedicated to Santa Ana, the Blessed Virgin’s mother. In 1599 the government allowed the construction of a stone church, which was begun not much later than this year. In 1720 construction of a larger stone church was begun under the direction of Vicente Ingles at a site different from that of the earlier church. The Archbishop of Manila Francisco Cuesta, concurrently acting as governor general, blessed the cornerstone on 12 September of the same year. Toward the construction of the church, the archbishop donated 4,000 pesos, while Ingles added to the sum from his own savings and from donations given by devotees to the Nuestra Señora de los Desamparados, an image of the Virgin enshrined in Santa Ana which Ingles brought from Spain. The total cost of the project was 33,000 pesos. During the Philippine Revolution of 1896, the church and convento were looted of its statuary, furniture, and church records. In the 1960s, the church was renovated with the addition of side aisles to accommodate the growing number of parishioners. Further intervention of the church fabric involved adding stained glass windows made of resin and covering the adobe stones with a cement and adobe mix, which would prove inimical to the structure in the long run. The altar was replastered, painted in enamel, and gilded with faux gold leaf.

The facade of the church is baroque. Tall and narrow, it is divided into three narrow vertical sections by engaged pilasters. The triangular pediment is pierced by two octagonal windows and a niche at the center, while volutes on the raking cornice crown it. The original church was cruciform in plan with an octagonal crossing tower. The four-story octagonal tower stands at the right of the facade. The church has a main retablo in the baroque style. Divided into horizontals and verticals, the retablo has a number of niches; the principal one houses the Virgin. Floral motifs decorate the columns of the retablo. Behind the main altar is a chapel called Camarin de la Virgen, the entrance of which is decorated with trompe l’oeil paintings depicting angels. The chapel’s focal point is a small shrine surmounted by a crown. This shrine directly leads to the Virgin’s image in the retablo. The octagonal ceiling is decorated with paintings.

Between 2008 and 2010, the Cofradia de la Inmaculada Concepcion and other devotees and heritage advocates restored the Camarin. Badly planned interventions using modern material incompatible with 18th century construction, painting materials, and techniques were removed. The painting in the Camarin was restored and its whole interior refurbished. Work also began on the main retablo, where layers of paint were removed beginning with the niche of the Virgin. The earliest layer of paint and true gold gilt was discovered and this guided the work of restoration.

The exterior walls of the nave were replastered with lime plaster and work continues at restoring the church properly.

ASIA/TURKMENISTAN – The Superior of the mission: “New creative forms of evangelizing”