The earthquakes of 1863 and 1880 severely damaged the Recollect church of San Sebastian. Wishing to build a church that would endure, the Recollects contracted the services of government engineer Genaro Palacios to design a church in the Gothic style, without flying buttresses, in the spirit of Revivalist architecture then in vogue. Plans for the church and all the necessary authorization were drawn while Fr Gregorio Sesma, OAR was vice-prior of San Sebastian from 1887 to 1888. The responsibility of overseeing the construction fell on Fr Bernardo Muro de la Virgen del Carmen, OAR, the prior, and Fr Remigio San Miguel de Santo Cristo, OAR. The former took charge of the legal work, the workers and consultants, and the procurement of materials; the latter supervised the daily work on the church. The church was blessed in the afternoon of 15 August 1891 by Fr Bernardino Nozaleda, OP, Archbishop of Manila. The inaugural Mass was celebrated the following morning, and festivities continued until 19 Aug with a triduum of thanksgiving. The festivities concluded with a procession at 9:30 pm, with the customary fireworks lit by the archbishop. The estimated cost of the church was more than 200,000 pesos. 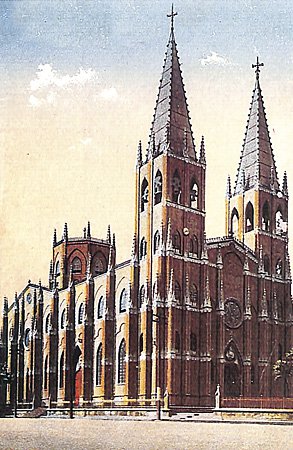 The plans specified a building covering a 704-square-meter area, with a central nave 12 m high from floor to the springing of the dome, and towering 32 m to the tip of the spires. The church was to be all of steel plates.

The use of steel and cast-iron parts for construction was considered an innovation from the late 19th to the early 20th century. Steel was used extensively in Europe and the United States for commercial building, e.g., the cast-iron buildings in lower Manhattan, New York, the Crystal Palace exhibition halls, and the Victoria Train Station in London. However, it was rarely used for a church. The plans were sent to Belgium, where the parts were manufactured in sections and then sent to Manila onboard 10 steamships. The parts were then assembled and erected on the site of the old church and anchored to an elevated concrete pavement. A trench 4.70 m deep and 3.60 m wide was dug along the perimeter of the church. The trench was filled with masonry of lime, sand, and cement, which formed a wall. Trenches filled with mortar were also built to link the pilasters on the longitudinal side of the church and the main door with the sanctuary. This network of masonry was built to support the heavy steel structure. The load bearing columns, attached to cast-iron plates were sunk two meters into the ground, and a heavy load of steel was placed over these plates, forcing them to descend one more meter. Iron chains, 5 m in length and one ton in weight, tied the columns together. Likewise, chains were run along the perimeter to link the outer pillars together. The whole area defined by the perimeter was filled with clay, sand, and mortar, and leveled to form the support of the floor. Then the heavy gauged steel plates were riveted together to form walls. Cast-iron buttresses, windows, doors, cornices, and ornaments contributed to the aesthetics of the church.

As a neo-Gothic church, San Sebastian bears the mark of this style: spires, ogee arches, rose windows, stained glass, and tracery. As in all Gothic churches, the central aisle is flanked by a colonnade that divides it from the side aisles. The columns have a quadrilateral core surrounded by semicircular tubes. The transept crossing is crowned by a polygonal crossing tower. The ambulatory is shallow, and the side chapels that open into the ambulatory found in Gothic churches is missing in the floor plan of the church.

The columns in the church rise to form groin vaults, made of a slightly thinner gauge. As steel could not be worked as finely as stone, the church lacks the fine ornamentation characteristic of Gothic churches. The play of texture found in stone is also lacking. The exterior was originally painted with lead white. The church interior was painted with oils to resemble jasper and marble to make up for the lack of fine detail and texture. Grisaille, strategically added to openings, gave texture to the interior and disguised the material used for the church.

The five neo-Gothic altars finely wrought of wood and finished with gesso, paint, and gold leaf contributed to the sumptuous interior of the church. Originally, the main altar had an image of Nuestra Señora del Carmen flanked by images of San Simon Stock and Santa Teresita del Niño Jesus. It was flanked by an altar of the Sacred Heart and another of the Blessed Virgin. In the transept were the altars of the Santo Nino flanked by Santa Monica and Santa Rosa and the altar of San Jose flanked by the martyrs of Japan. The pulpit was decorated with scenes from the bible, the life of the Blessed Virgin, and the four great doctors of the Church.

The Filipino sculptor Eusebio Garcia worked on the sculptures of the church while Lorenzo Rocha did some of the paintings. Light entered through 12 stained-glass windows manufactured in Linnich, Germany depicting the mysteries of the Rosary. These added color to the interior.

The church has survived earthquakes but not the alternating seasons of rain and sun, which contribute to the corrosion of the structure. To preserve the church from further damage, the exterior has been cleaned and painted in shades of gray. The interior was recently restored, particularly the altars, which were painted and gilded.

With the corrosive and polluted atmosphere of downtown Manila, maintaining San Sebastian has been a challenge. So the church is repainted every so often, especially its exterior, which is now aqua in color rather than gray.