San Joaquin town was earlier known as Suaraga, Siuaraga, or Suaragan, a name derived from the Siuaga (now Siwaragan) River, which in turn was named after a venomous snake. It was an encomienda in the southeast part of Panay Island under the guidance of Esteban de Figueroa. Christianization was initiated in 1581 by the Jesuits, to whom Figueroa donated the encomienda in 1585. In 1594 Panay Island was placed under Augustinian supervision by virtue of a royal decree. A legal battle between the Jesuits and Augustinians over the area lasted for more than 20 years. It was amicably settled in 1696 when the Jesuits agreed to give up missions in Iloilo in exchange for other parishes.

Canonically, Suaragan was a visita (mission chapel) of Hamtic (Antique) from 1581 until its independence in 1592. In 1688 it remained a visita until 1692 when it was made into a parish with Miag-ao as its annex. Nine years later it was annexed to the town of Guimbal and then to Miag-ao in 1731. In 1793 it was separated civilly from Miag-ao and became an independent town known as San Joaquin. It was erected as a parish under the advocation of the Most Holy Name of Jesus in 1801. Its residents supported themselves through abaca and cotton weaving, farming, fishing, and cattle raising. 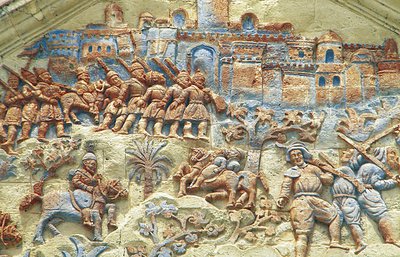 The town’s church was built on a plain overlooking the sea by Fr Thomas Santaren, OSA and inaugurated in 1869. Its fabric is of white coral rock quarried from nearby shores and from the town of Igbaras. Halfway through the construction, an elaborate bas-relief was carved on its triangular pediment.

Inscribed Rendicion de Tetuan (Surrender of Tetuan), the work depicted the Battle of Tetuan in Morocco in 1859, where Spanish troops under Gen Leopoldo O’Donnell defeated the Moors led by Moroccan Crown Prince Muley Abbas. The depiction of Rendicion was a manifestation of Santaren’s patriotism. Rendicion was done with the help of Spanish engineer Felipe Diaz and Filipino or perhaps Chinese carvers. Local imagination was used in delineating soldiers and horses, like figures from a komedya, interspersed with local flora and fauna.

Inside the church is a stone retablo with sculptures of San Pedro and San Pablo. Traces of polychrome found on these images as well as on the Rendicion imply that a number of churches may also have had similar finishes. To the church’s left is the sprawling ruin of its old convent, notable for its wide oval well and a kiln for baking bread. Bells for the tower were cast in a still unlocated foundry in the vicinity of the church. Both tower and convento were damaged in the 1948 “Lady Caycay” earthquake.

Fr Santaren is remembered for his translation of the pseudo-history of the 10 datus from Borneo who were said to have landed in San Joaquin in the 13th century. He and his brother Hilario, also a priest, opened the road which cuts through the mountains to connect San Joaquin with Hamtic in Antique.

As notable as the church is the town’s cemetery or camposanto located about a kilometer to the east. Built by Fr Mariano Vamba, OSA in 1892, it is dominated by an octagonal capilla (chapel) of locally cut coral stone and red bricks, approached through a grand but steep stone staircase. Both cemetery entrance and capilla are decorated with bas-reliefs of flowers, leaves, and dentils.

In the 1980s and 1990s, the right and left side walls of the church were incorrectly reinforced with concrete. Both the apse and stone retablo were also reinforced, sealing the exposed mamposteria or rubblework. Restoration of various parts of the church was undertaken throughout the first decades of the 21st century.