The first San Ignacio was the third church the Jesuits built in their compound at Intramuros, located at the southern part of Manila, bounded by Calle Real (now General Luna), Victoria, Santa Lucia, and Muralla, and presently occupied by the Pamantasan ng Lungsod ng Maynila. The first church, a wooden one with a tile roof, was built in 1587 with donations from Don Gabriel de Ribera, the oidor (judge) of Manila. It was replaced between 1590 to 1596 by the first Jesuit stone church in the Philippines, dedicated to Santa Ana, the Blessed Virgin’s mother. It was planned by the Jesuit Antonio Sedeño after the pattern of the Jesuit church in Rome—Giacommo da Vignola and Giacommo della Porta’s Il Gesu. Santa Ana church was seriously damaged by the earthquake of 1600. The church was subsequently repaired.

It was replaced between 1626 and 1632 by a new church constructed following the plans of the Italian priest-architect Gianantonio Campioni. The church as it came from Campioni’s hand was plain, perhaps more Italian than Spanish baroque. The church was dedicated to San Ignacio de Loyola who was canonized in 1622. In 1700 the church ceiling was painted by Bro Manuel Rodriguez, assisted by Filipino artisans. Around this time the church facade was decorated with carved foliage that gave it a plateresque appearance. In 1727 the church was solemnly consecrated after extensive renovations. 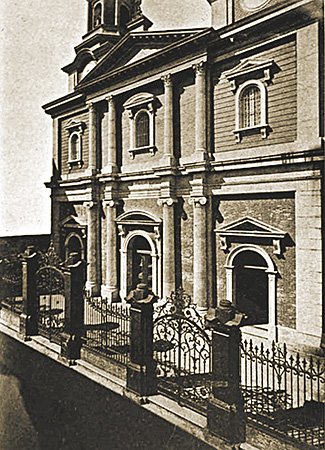 After the Jesuits’ expulsion from the Philippines, the archbishop of Manila in 1771 requested the government to allow the diocesan seminary, San Carlos, use of the abandoned Jesuit College of Manila, adjacent to the church. In 1784 the College of Manila and the church were turned over to the archdiocese following the visitation of 1778. The seminary was renamed Real Seminario Conciliar de San Carlos. On 6 September 1852 at 1:30 pm an earthquake destroyed the church. Stones of the church were later used in the foundations of the second San Ignacio the Jesuits were going to build at Arzobispo St, next to the episcopal palace of Manila, beginning 1879.

The first San Ignacio, of grayish adobe quarried from Antipolo, was located on a southeast-by-northwest axis, its front door opening to a quadrilateral plaza flagged with stone and surrounded by a breast-high wall ornamented by stone lions. The plaza opened to Calle Victoria. The church was 62 m long and 30 m wide. Its height from the base to the top of the dome was 33.83 m. The central nave was 12 m wide. This was flanked by aisles of about 7.62 m wide, enough to appear as naves.

The facade was divided into two stories crowned by a triangular pediment. Twin towers of three stories, terminating in a triangular roof, flanked the facade. The church bells were hung in one of the facade towers and a clock installed in the other tower. Ionic capitals on pilasters were used throughout. At the first floor of the bell tower, decorative niches were gouged into wide pilasters, while at the facade thin pilasters flanked niches. Pairs of pilasters were on the second and third floors of the bell towers. Large windows pierced the second floor both at the facade and on the towers. All in all the facade gave a pleasing appearance. Hence, according to the Jesuit Murillo Velarde, the Campioni-designed facade is the shell that declares its content. However, Velarde writing in 1734 and referring to the plateresque designs imposed on the facade, lamented the excessive ornamentation that ruined the majesty of the original concept behind the facade. 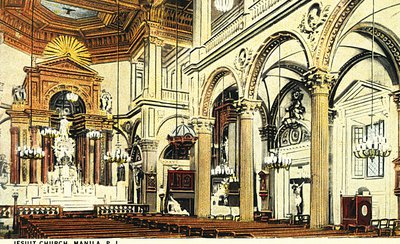 The choir loft rested on elliptical arches. The church roof was supported by 12 well-wrought pillars, rectangular in shape, fluted with tiny canals terminating in Ionic capitals. From pillar to pillar were semicircular arches decorated at the center with cartouches. Then from pillar to the 2.74 meter-thick wall were equally well-wrought arches, together forming domes of stone. Above these arches, galleries were made to accommodate large crowds for such times as Lent, missions, and solemn feasts. The idea of the gallery was not novel. Santa Ana on the same spot had already used it. Il Gesu in Rome also had galleries, called correte. The upper gallery, covered with domes, rested on the pillars that echoed those below. The axis of these domes coincided with those below. The interior gave an overall impression of solemnity. The crossing of the principal nave and transept was covered by an octagonal crossing tower, which had a window on every side to allow light to filter into the church. The crossing tower’s exterior had a gallery that ran around it, making the dome accessible from outside. San Ignacio, the titular of the church, was depicted in a life-size statue and located in a niche on the second level of the retablo that was all of four stories. The retablo was richly gilded, and before it stood an altar with a frontal of finely chased silver. Flanking the altar and distributed throughout the nave were lampstands, also of silver. At the side of the transepts were the collateral naves. Beneath the choir loft stood altars dedicated to different saints. At the right side was the altar of the crucifix. There was also the altar of the Blessed Virgin under the invocation of Dolores and Loreto. The collateral aisles, which terminated in chapels, had one dedicated to San Jose and the other to San Francisco Xavier. Beneath the choir loft were smaller altars for San Francisco Regis and San Luis Gonzaga; and San Juan Nepomuceno and San Joaquin, the Blessed Virgin’s father. An auxiliary entrance on the gospel flank of the nave was also loaded with ornamentation.

The second San Ignacio was built to serve two purposes: as the oratory or college chapel of the Ateneo Municipal de Manila and as the central Jesuit church in the Philippines. The Ateneo used the church for special occasions or when large crowds were expected, otherwise, the Ateneo used the students’ chapel dedicated to the Immaculate Conception.

It was considered the masterpiece of the Filipino artists Isabelo Tampinco et al, and the architect Felix Roxas Sr. The plan was drawn by Roxas, who had trained in England and had traveled extensively in Europe and India. The cornerstone was laid on 9 February 1878, with the archbishop of Manila the Dominican Pedro Payo presiding over the rites. He was also one of the principal patrons of the church, who donated part of his garden as the site for the San Ignacio. Roxas died while the church was being built, and the Jesuit brother Francisco Riera took over the supervision of the work. Riera would later help build churches in Mindanao, among them the Dapitan Church and the Jasaan Church, the latter patterned after Roxas’s San Ignacio. In 1882 Tampingco and 50 to 60 artisans, including his father-in-law Crispulo Jocson, began finishing the church interior following designs drawn by Agustin Saez and sometimes improving on them. Saez was director of the Academia de Dibujo y Pintura and a teacher of art at Ateneo. Tampinco and his artisans carved the retablo, colonnade, and coffered ceiling of the church using hardwood from Surigao. A Spaniard, Francisco Rodoreda, carved the three marble altars, and a Filipino, Felix Martinez, painted canvases of Jesuit saints. The bell tower, made of iron sheets, was built by Jose Fuentes, a government engineer. On the whole, Roxas’s plan was executed except for a cupola, which the Jesuits decided not to build for lack of funds, and the bell tower, which was built taller and slimmer. In 1895 a crypt was dug under the main altar to hold the remains of Jesuits who had worked in the Philippines since the 16th century. In 1932 a fire swept Intramuros, destroying Ateneo but leaving San Ignacio intact. The church was finally destroyed by fire in 1945 during the Battle of Manila.

San Ignacio was designed in the neoclassical style with touches of the Renaissance in the interior, especially in the colonnade with its contrasting colors of white and natural wood. The chaste facade of piedra de visayas (cut coral), bricks, and marble led into an arcaded church with Corinthian columns of carved wood. The arcade was ornamented with medallions depicting Jesuit saints. The arcade supported galleries that were joined to the choir loft and that opened into the nave. The ceiling was ornamented with acanthus leaves enclosed in boxes with ropelike designs. Where the cupola should have been the ceiling was raised to form a truncated octahedron decorated with reliefs of Jesuit saints. The main retablo had a single niche with a statue of San Ignacio carved by Jocson in the classical style favored by the Gremio de Escultores. The corners of the retablo were ornamented with angels. The altar table itself of Carrara marble was decorated with a high relief version of Leonardo da Vinci’s Last Supper. The pulpit of hardwood was designed by Saez and meticulously embellished with images from the bible and the symbols of faith, hope, and charity. It was considered the masterpiece of the interior.

Plans to restore the San Ignacio had long been in the works since the time when Imelda Marcos, appointed governor of Manila in 1975 and then minister of the Ministry of Human Settlements, commissioned studies on how to restore the San Ignacio and the adjoining buildings of Casa Mision and Ateneo de Manila. No restoration was done but the lots of Ateneo and Casa Mision were cleared.

During the administration of Maria Ana L. Harper, appointed head of the Intramuros Administration (IA) in 2008, a more assiduous move to restore the San Ignacio was launched. Planning was begun and an inventory of the IA’s holding of ecclesiastical art was done. The plan was to restore the San Ignacio not as a church but as a museum of ecclesiastical art. Some of the objects IA wanted to exhibit had been earlier shown in the Puerta Isabel museum inside the casamata or chambers of the Intramuros walls near Puerta Isabel II. But more were in storage.

The restoration project finally got under way, after a plan to build a very modern museum, which suggested the lines of San Ignacio was rejected as not conforming to the norms and guidelines of Intramuros as a historic district. The restoration of San Ignacio began with an archaeological survey under Harper. This uncovered evidence that the site of the San Ignacio and the Casa Mision was inhabited in precolonial times. Terra cotta pottery and Chinese trade pottery were unearthed. Among the more significant finds was a shard believed to be with baybayin (alphabet) script.

Restoration was underway in 2013. The decision was to rebuild the San Ignacio’s exterior as faithfully as possible. However, the twin towers made of imported iron cast components were to be replicated in reinforced concrete. The interior is still a subject of debate. One school of thought is to rebuild as much of the interior because it was the center of attraction in San Ignacio. It has been argued that there is sufficient data (plans and photographs) to recreate the interior, and that there are corps of artisans who can do a good job. Another school of thought is that the church will no longer be a church, and the interior, destroyed and gutted by war, is a blank slate in which to build an appropriate design for a contemporary museum.