The Santa Monica Parish Church (Spanish: Iglesia Parroquial de Santa Mónica), also called Panay Church, is a historic church in Panay, near Roxas City in the province of Capiz, on Panay island in the Western Visayas region of the Philippines. It was built in 1884 on the site of an earlier church, built in 1774 by Miguel Murguia, which was gravely damaged by the typhoon of 17 January 1875.[1]:423 The church is built of coral blocks and is approximately 70 metres long, 25 m in width and 18 m in height; the walls are about 3 metres thick.[1]:423[2]

The church has an unusually large bell, the largest in the country. This was cast by Juan Reina in about 1884, using sacks of coin given by the people of the town; it weighs more than 10 tonnes.[1]:423

Panay, officially the Municipality of Panay (Capiznon/Hiligaynon: Banwa sang Panay; Tagalog: Bayan ng Panay), is a 3rd class municipality in the province of Capiz, Philippines. According to the 2015 census, it has a population of 46,114 people. [3]

Pronounced as Pan-ay, it used to be the provincial capital of Capiz. Panay is 8 kilometres (5.0 mi) east from Roxas City.

Pan-ay is the site of the famous coral-stone Santa Monica Church, home to the largest Catholic Church bell in Asia. 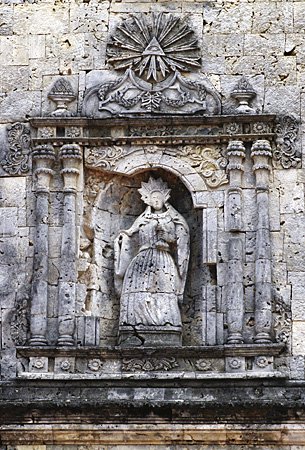 This church stands on a swampland that was once so low that it would flood when the river overflowed, hence the name of the town, Pan-ay, meaning “mouth of the river.” In 1569, Miguel Lopez de Legaspi transferred the capital of the Spanish colony from Cebu to Pan-ay. The Augustinians took charge of Pan-ay. The first permanent building must have been up by ca 1692. The Augustinian Fr Manuel Lopez reported church damages after a typhoon in 1698. In 1774, Fr Miguel Murguia, OSA, rebuilt the church, which was struck by a violent typhoon a century later. Fr Jose Beloso, OSA, completed the second reconstruction in 1884, although the adjacent convento was never rebuilt. The church facade, built of finely cut coral, is an excellent example of the baroque merged with the classic. Shallow pilasters divide the first story, while two small deep niches balance the simple arched entrance of the church. The more ornate second story has fanciful niches, a rose window at the center, and a statue of Santa Monica in a niche below it. Pineapple-like finials punctuate the undulating pediment lines and flank another relief of a saint. Finely carved floral swags and leaves decorate all the niches and windows of the facade.

The floral swags that decorate the exterior are carried into the nave, whose floors are of white and black marble. The crossing tower is supported by four carved posts. A pulpit is attached to one of them. The five retablos, bas-relief, and statuary were carved by the town’s best sculptor, Bergano. The retablos are unique for their Biblical verses. The church has silver frontals made by Manila artisans. Pan-ay’s other claim to fame is the 10,400-kilogram-bell in the five-story belfry, standing to the left of the facade. A parish donation of 70 sacks of coins went into casting the Dakong Lingganay or Big Bell. A foundry was dug nearby for the project. In this same tower a clock has been attached. The topmost level of the bell tower was recently rebuilt. To the right of the church, by the ruins of the old convento, a new building has been constructed. In this building is a small museum that houses the treasures of the parish.

The National Museum of the Philippines declared Pan-ay a National Cultural Treasure in 1996 and the National Historical Institute declared it a National Historical Landmark in 1997. Since the declaration, the people of Pan-ay under the leadership of the parish priest of Santa Monica church have worked on refurbishing the church. The wooden roof frame, which had deteriorated, was replaced with a steel framework and the roof replaced by long-span galvanized iron. The plaza in front of the church, formerly a grassy field, was paved. The convento, which had been repaired a number of times, was remodeled to look like a bahay na bato (stone house).

Flooding behind the church was addressed by filling in low areas. All the effort at repair and refurbishing was given a harsh blow when, on 7 November 2013, Typhoon Yolanda (Haiyan) ran the breadth of the Visayas. Part of the church roof was damaged but by and large the damage to the church complex was not catastrophic.

The town originally called Bamban was changed by the early Spaniards to Panay, a word which means “mouth of the river.” This is also the location of a fortress built by Juan de la Isla in late 1570. The Paseo de Evangelizacion 1566 can be found in the town plaza and was erected through the efforts of Rev. Msgr. Benjamin F. Advincula. 1566 was the year the Spaniards arrived in the island of Panay and became the second Spanish settlement in the country next to Cebu.

Miguel Lopez de Legazpi transferred the Spanish settlement from Cebu to Panay in 1569 due to the lack of food. The town was formally founded in 1572 (1581 according to Jorde), although by that time Legazpi had moved the capital of the Philippines, further north, to Manila. Fr. Bartolome de Alcantara was named the prior of the town with Fr. Agustin Camacho as assistant. A prosperous town due to trade, Pan-ay became capital of captivating Capiz for two centuries, until Capiz was named capital. The town name was eventually given to whole island. After 1607, Fr. Alonso de Méntrida, noted for his linguistic studies and Visayan dictionary became prior. In the 18th century, Pan-ay was famous for its textile industry which produced a cloth called suerte and exported to Europe. In the 19th century, Don Antonio Roxas, grandfather of Pres. Manuel Roxas, opened one of the largest rum and wine distilleries in the town. The Augustinians held the parish until 1898, when administration transferred to the seculars.

The first church was built before 1698 when it is reported that a typhoon had ruined it. In 1774, Fr. Miguel Murguía rebuilt the church, but it was later damaged by a typhoon on 15 January 1875. Fr. Jose Beloso restored the church in 1884. The church is best known for its 10.4 ton bell popularly called dakong lingganay (big bell). The bell was cast by Don Juan Reina who settled in Iloilo in 1868. Reina who was town dentist was also noted as a metal caster and smith. The bell was cast at Pan-ay from 70 sacks of coins donated by the townspeople. The bell was completed in 1878. It bears an inspiring inscription which translated reads: “I am God’s voice which shall echo praise from one end of the town of Pan-ay to the other, so that Christ’s faithful followers may enter this house of God to receive heavenly graces.”