In 1571, Juan de Salcedo was sent to pacify the inhabitants of Nagcarlan aka Nagcarlang. After a brief resistance, the inhabitants, together with those of nearby Majayjay, capitulated to Spanish rule. In 1578, evangelization commenced with Frs Juan de Plasencia and Diego de Oropesa, OFM. In 1583, Fr Tomas de Miranda organized the town and introduced the cultivation of wheat at the same time. As was customary, a church of perishable material may have been constructed then. A stone church, the present one, was constructed in 1752 under the direction of Fr Cristobal Torres, OFM; this was damaged by fire in 1781. Fr Atanasio de Agrobrejo, OFM, repaired it immediately, but it was his successor, Fr Fernando de la Puebla, OFM, who completed it and also built a four-story bell tower. 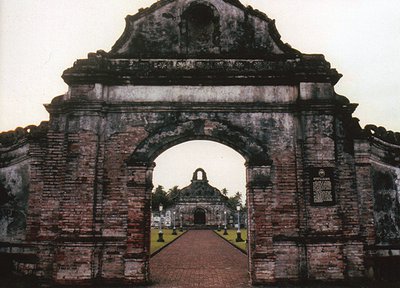 In 1845, Fr Vicente Belloc, OFM, renovated the church’s woodwork, painted it, and added ornaments to it. He then renovated the choir loft by raising three strong arches of cut stone upon which the choir rested. He covered the central aisle and decorated the main nave, presbytery, and baptistry with azulejos (glazed tile).

The church facade appears to trace back to 1752 as Belloc’s renovation was less than total. It is a good example of a Philippine interpretation of baroque. Pealing stucco reveals that the facade and the nave are built of alternating layers of adobe and brick. Thus, a pleasing striped pattern has emerged. Flanking the facade is the octagonal bell tower—this is unusual for being of equal dimension throughout, while the more common type is of diminishing dimensions. The side entrance is flanked by Corinthian columns, while a conch decorates the arch’s capstone. Above the doorway is an ovoid niche, surrounded by foliage and surmounted by a cherub’s face. In one niche is an image of San Juan Bautista. The church retablo has a solid silver image of San Diego de Alcala, a rarity in Philippine iconography, and bas-reliefs, one of them depicting the power of Mary’s intercession which she lavishes on devotees in a relief showing heaven and purgatory. 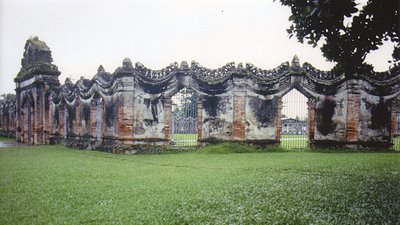 The contrast of styles is most apparent in the cemetery built by Belloc at the outskirts of the town. A quadrilateral fence of wrought iron set in a brick structure allows a vista of the mortuary chapel within. The chapel, made of bricks and stone, has a neoclassical facade and an underground crypt. Because of this crypt, the cemetery is popularly known as an “underground cemetery” when in fact most burials are aboveground in the niches built into the cemetery’s perimeter wall. The crypt niches are reserved for VIPs.

The whole interior was previously painted in the style that was in vogue in the later half of the 19th century.

Nagcarlan Church has been designated as House of Worship Level-II with marker by the National Historical Institute (NHI) since 1937. The cemetery was declared a National Historical Landmark through Presidential Decree No 260, on 1 August 1973, as amended by Law No 1505, on 11 June 1978, and was soon after restored by NHI.