A royal decree of 13 May 1579 ordered that a cathedral of moderate cost be built in Manila where most convenient. Eight years earlier, on 24 January 1571, the feast of St John the Baptist, the conquistador Miguel Lopez de Legazpi founded the city of Manila, formerly, the native settlement of Rajah Sulayman, which he had taken possession of on 19 May. Because it was the feast of Santa Potenciana, she was chosen patroness of the new settlement. When founding the city, Legazpi demarcated the city lots, setting aside a parcel of land for the church under the patronage of La Purisima Inmaculada Concepcion. 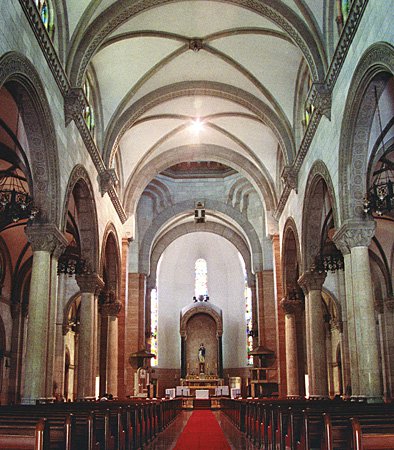 Juan de Vivero, who baptized Rajah Matanda, arrived in 1566 as chaplain of the nao San Geronimo, bringing colonists and troops to bolster Spanish presence. Given special faculties and privileges by the Archbishop of Mexico to establish the spiritual administration of the new Philippine colony, he prepared Manila for the appointment and arrival of its first bishop. Later, Vivero would be appointed as the first vicar-general and the first ecclesiastical judge of Manila.

Vivero had the Church of the Inmaculada built and from it the religious affairs of Manila were administered. Although the earliest structure was a construction of nipa and bamboo, in the manner of vernacular architecture, it became the parish church of Manila. The secular priest Juan de Villanueva was appointed as first parish priest. The other priests who served the parish were Juan de Vivaneta and Nicolas Riccio.

This church, and Manila with it, was threatened on 30 November 1574, the feast of St Andrew the Apostle, when the city was attacked by the Chinese Limahong. Fighting was intense during which Martin de Goiti was killed. The timely return of Juan Salcedo, who had been sent to establish settlements north of Manila, changed the tide of battle. The Spanish forces quelled Limahong’s army. Limahong and his invading troops fled to Pangasinan, where they were pursued by Spanish troops but were able to escape.

Manila celebrated the victory with fireworks and a mass with sermon was held in the Church of Our Lady of the Immaculate Conception in Manila. San Andres was named patron of the city.

To prepare for the arrival of its first bishop, Vivero rebuilt the bamboo and nipa church, this time with timber and more durable material in compliance with a royal decree of 13 May 1579 that a cathedral of moderate cost be built in Manila when and where most convenient. The church was being prepared to receive the new bishop, Fray Domingo de Salazar, OP, whose appointment was issued in 1579, but it would take two years more for him to arrive in Manila.

In September 1581, Salazar, with a group of Franciscan and Jesuit missionaries and a host of other Spaniards, arrived at the Bicol peninsula. From there they decided to take a journey to Manila. It took the party a good month of travel to reach Manila. Arriving in Manila, Salazar saw the cathedral being finished. On 21 December 1581, he saw its completion. The first church was a modest construction of wood, bamboo, and nipa, which was given the titular Inmaculada Concepcion. 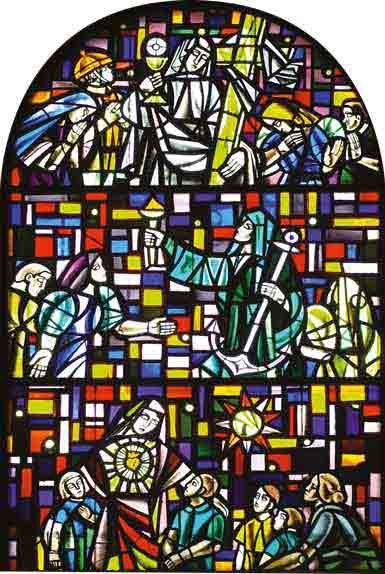 This church was damaged in August 1583 when a fire swept through Manila. A temporary church of wood replaced the damaged structure until it was ruined by a typhoon on 15 June 1588. A royal decree of 20 January the previous year ordered Gov-Gen Santiago de Vera to commence construction of a new church, but nothing was done until the incumbency of Gov-Gen Gomez Perez Dasmariñas. Antonio de Morga reports that a cathedral of masonry was built in 1591 by Dasmariñas. However, a report of 1597 states that as of this year the cathedral had no bell tower, baptistery, chapter hall or cloister. The earthquakes of 1599 and 31 December 1600 ruined the church completely.

The second cathedral was conceived during the reign of the third archbishop of Manila Fray Miguel Benavidez, who initiated the project upon his assumption of office in 1603. Work was suspended upon his death in 1605. In 1610 his successor Don Diego Vazques de Mercado ordered the resumption of work. The same bishop solemnly consecrated the cathedral on 5 December 1614. The cathedral of this era was made of stone. It had 3 naves, 7 chapels including the main one, and 10 altars. It lasted until 1 August 1621, when a strong earthquake fractured its walls and pillars and damaged its roof so that it was too dangerous even to enter the church.

The task of reconstruction fell upon Don Pedro Flavia, appointed as interim governor of the archdiocese. On 30 November 1645 another earthquake damaged the structure beyond repair so that it was necessary to build a temporary structure of wood in the plaza fronting the church.

During the reign of Abp Miguel de Poblete, the cornerstone for the third cathedral was laid on 20 April 1659. The structure was not completed within Poblete’s lifetime, although he willed his estate toward the construction of the church. In 1671 the capilla mayor (larger or main chapel) was completed and dedicated, but the sacristy and other offices were still undergoing construction in 1676. Poblete’s cathedral had three naves, which were separated by a row of six pairs of piers. These piers were not perfect squares but had set back corners in the manner of early Romanesque architecture.

During the reign of Abp Don Diego Camacho y Avila, 1697-1706, the two sacristies, chapter hall, and other offices were completed. Work on the belfry had begun. The archbishop requested the king for funds to complete the structure. The six-story bell tower was constructed by a Chinese mason, Dionisio Saplan, in 1706. Further repairs were done on the complex as the annual rains caused the deterioration of the woodwork. The completed cathedral was simple. Eight chapels flanked the nave: four to the right and three to the left, and a larger chapel, the sagrario (sanctuary of the Blessed Sacrament), with its own sacristy. The church had no transept or apse, and the sacristy was located behind the altar area. Other rooms in the complex included rooms for the sacristans and storerooms.

In 1737, during Fr Juan Angel Rodriguez’s reign, the cupola of the cathedral was torn down and replaced by one of bricks. The nave was also repaired at this time.

During the incumbency of Fr Pedro de Santo de la Santisima Trinidad, the cathedral was almost thoroughly rebuilt following the plans of Juan de Uguccioni, a Theatine priest architect. Uguccioni proposed an almost total renovation. His plan involved raising the floor level of the church for aesthetic and health reasons, demolishing the last two piers of the main nave and the rooms behind the altar to build an apse and transept. The architect built two piers at the transept to carry a semicircular dome. He demolished the upper portion of the nave wall to build a clerestory; both dome and clerestory allowed light into the church. He left two chapels of the total seven small ones and expanded the sagrario by eliminating the storerooms, rooms for the sacristans, and the patio in the old plan.

Uguccioni gave the cathedral a facade similar in temper to the Il Gesu in Rome, without the outer bays. The execution of his plan was entrusted to Esteban Rojas y Melon, but upon the archbishop’s death in 1755, work was suspended due to lack of funds. The cathedral was not entirely complete when it was dedicated on 8 December 1760 by Abp Manuel Antonio Rojo. It was completed in 1771, when the archbishop sent a report on the expenses incurred to the Crown. The cathedral collapsed during the earthquake of 3 June 1863.

The fifth cathedral was not started until 1872, when the architects Luciano Oliver, Vicente Serrano y Salaverri, and Eduardo Lopez Navarro began working on it, apparently in succession. The cathedral hewed closely to the Uguccioni plan, although the number of side chapels beginning right of the entrance was increased. The squarish capitals of the chapel were replaced by clusters of four columns. The plan of the church was Byzantine—its tall nave and clerestory were similar to those early Christian Byzantine basilicas. Its details combined elements from different styles (i.e., the baroque dome, Romanesque tympanum and rose window, and Gothic recessed portal). Isabelo Tampinco designed and executed the decorations on this elegant portal. The bell tower, a six-tiered polygon, was a detached structure connected by a corridor to the facade. The cathedral was blessed on 8 December 1879. An earthquake in July 1880 ruined the bell tower, which was later renovated as a four-story structure. The church was bombed by American planes during the Battle of Manila in 1945.

From 1954 to 1958, the sixth cathedral was built on the same site as the former one. Construction began under the incumbency of Abp Rufino Santos, later made first Cardinal of Manila, using funds from private donations and war reparation money. The new cathedral was designed by Fernando Ocampo Sr. The cruciform and triple nave plan already seen in Uguccioni’s cathedral was retained. The tiered bell tower was replaced by a simple straight tower with a belfry. The church was vaulted and its interior faced with marble and travertine. The clerestory was replaced with stained glass depicting the history of Christianization in the Philippines, famous images of the Virgin, coats of arms of the state and prelates, and the works of mercy. Artist in residence Galo B. Ocampo designed the stained glass. Chapels tucked into the arcades along the lateral naves completed the nave. Each of these chapels was carefully decorated; one chapel, donated by Spain, had abstract windows of red stained glass and modern appurtenances of cast bronze. The facade, saved from the destruction of war, was restored. Bronze doors cast in Italy depicted symbols of the Virgin Mary and the history of the cathedral.

During the Jubilee year 2000, a door of the Manila Cathedral was designated as the jubilee door. Beginning in 2002, in preparation for the golden jubilee of the Cathedral’s restoration in 2008, major structural repairs and renovations were done on the church fabric.

As of December 2003, some of the work done involved repairs on the water system of the cathedral, rehabilitation of its air-conditioning system, and the repair of the cathedral office. Some works involved face-lifting, such as installation of the Papal coat of arms at the facade and at the dome area of the Cathedral as befits a Basilica Minore, improved lighting, and improvement of the Episcopal throne.

In 2011, it was decided that the cathedral should be temporarily closed. Early in 2012, the cathedral was closed. From 7 February 2012 to 9 April 2014, the Parish Church of San Fernando de Dilao (Paco) was designated as provisional cathedral. Work began on reinforcing the cathedral’s foundations and strengthening its pillars and column before working on its external finish and face-lift, which included installing a new and more efficient air-conditioning system and better lighting. The retrofit and repairs were completed in 2014. The cathedral reopened April 9 Wednesday, just before Holy Week.

What “weird Catholicism” reveals about the language of the internet