The San Gregorio Magno Parish (Filipino: Simbahan ng Parokya ni San Gregorio Magno; Spanish: Iglesia Parroquial de San Gregorio Magno), also known as Majayjay Church and St. Gregory the Great Parish Church, is one of the oldest Roman Catholic churches in the Philippines located in the municipality of Majayjay in Laguna. It is recognized by the National Museum as a National Cultural Treasure (Level 1).

Located on the slopes of Mt Banahaw, Majayjay strategically lies along the route from Manila to Lucban, and thence on to the Pacific coast and the Bicol peninsula. Majayjay was a thriving settlement when Juan de Salcedo ruled in 1571. It was constituted as a town in 1578. Throughout the Spanish period it was under the Franciscans who, recognizing its clean air and healthful waters, erected a spacious convento there as a place of rest and recuperation.

The history of the construction of the churches of Majayjay, which were to number six in the end, may be taken as typical of many other churches in the Philippines. The first chapel of light materials burned down in 1576 and was rebuilt two years later. A third church, built some distance away from the first site, was consumed by flames in 1602 or 1606. It is not clear when the church on the present site was begun. The stone church may have commenced in 1616. Its construction must have been arduous, as indicated in an order of 1621 requiring the absentee citizens of Majayjay to return and finish the church. The church and convento were up by 1649 when they were described in a document of that year. Both were burned along with the rest of the town in 1660. Since the walls were of stone, however, reconstruction work was not considerable. By 1707 the church was in danger of collapsing. The parish priest Jose de Puertollano conceived of sandwiching the extant walls in brick, an idea that took 20 years to complete, resulting in much disharmony between the parish and its parishioners. Considering the immensity of the church and the paucity of its population, residents continued to “absent” themselves from the town. In numerous instances, physical punishment and fines were imposed on those who did not fulfill their quota of work, even if they were the town’s elite. T 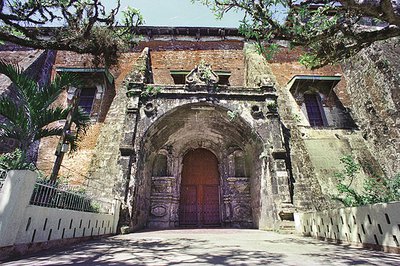 oodwork were necessary in the 19th century, the edifice was strong enough to survive powerful earthquakes, with hardly any structural damage.hese fines were imposed to raise funds to pay the carpenters and other laborers. Bricks and tiles were manufactured in the town. Leaves of the

puso-puso plant were crushed and mixed with mortar for added durability. The church was substantially completed before Puertollano’s death in 1730. As a partial result of the difficulties in Majayjay, the towns of Magdalena and Luisiana were created in 1821 and 1854, respectively. Many residents had sought refuge in these places to escape the exaction in Majayjay. Although numerous repairs and changes of w

It is as yet difficult to assign sections and walls of the church to various periods of construction in its long and painful history. Several portions of the exterior, notably the facade and the southern side entrance, display niches and cornices which were partially covered by pilasters and moldings applied on later dates. The baptistry adjoining the bell tower, the portico over the south entrance, and the massive buttresses are also obvious additions. With its counterparts in Tayabas and Lucban, Quezon; Bacolor, Pampanga; and Paracale, Camarines Norte, the south portico is a rare example of such Spanish-era construction. The church interior is a local adaptation of the baroque arrangement of space. This is brought about by the graceful trefoil curve of the choir loft and the galleries that run throughout the church nave and the protuberant pilasters that support it. The recessed apse, slightly raised from the level of the nave and designed like a stage proscenium, reinforces the baroque feel. The apse and the baptistry are paved with azulejos (glazed tiles). Azulejos also decorate the wall of the nave. Along the nave are a bas-relief of the Blessed Virgin, flanked by symbols of her titles, and a crucifixion scene with an imaginary Jerusalem in the background. Near the church door is a large stone stoup, probably a baptismal font, decorated with low relief of animals and foliage.

The Romanesque church of Majayjay is 60 metres (200 ft) long, 17 metres (56 ft) wide and 16.5 metres (54 ft) meters high. Its façade has three levels, each level scaled proportionally and topped by a triangular pediment with a circular window. The central nave consists of a huge wooden door of the main portal, choir loft windows and saint’s niche. The interior contains a retablo mayor and four other minor retablos with intricate designs. The floor is tiled with azulejo and the walls have been preserved with some alterations. The five-storey square belltower with a conical roof and ballustrated windows on each polygonal level is connected to the langit-langitan[what language is this?], a cat-walk above the ceiling which leads to the crossing over the transept. The belfry has arched windows each with a bell trimmed with finials and a large antique bell on top. It also has a large side door on the right side of the church.