Northern Samar (Waray: Amihan Samar/Norte han Samar; Tagalog: Hilagang Samar) is a province in the Philippines located in the Eastern Visayas region. Its capital is Catarman and is located at the northern portion of the island of Samar. Bordering the province to the south are the provinces of Samar and Eastern Samar. To the northwest, across the San Bernardino Strait is Sorsogon; to the east is the Philippine Sea and to the west is Samar Sea. 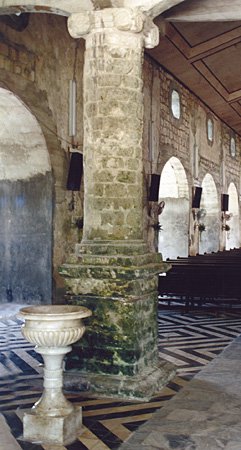 In the prehispanic times, the poblacion of Laoang was a settlement called Makarato located in an island called Lawang, which later evolved into Laoang. In popular legends, the name originated from the word lawag (Waray for light).

Jesuit missionary Fr Ignacio Alzina, SJ (1668), describes Laoang in his writings: “On the opposite side of Rawis, on the Lawang Island, which is a sandbar there is a solid ridge of rock. It is fashioned by nature itself and it is so steep that it looks like a facade of a wall… It was a natural fortification, due to its great height of massive rock; it was also secured as if by a moat which encircled its three sides. The fourth side was blocked by a palisade of strong logs. Then too, nature also formed on one side of this rock something like a small cove with its little beach.” As it is strategically located at the mouth of the Catubig River, the main lifeline of Northern Samareños, Laoang became a trading center for the Catubig Valley.

In 1627, Jesuits established Laoang as a visita or mission chapel of Palapag, and it remained so until the 18th century when it became an independent mission. It became a settlement in 1680, when the families of the three native principales moved to the area from nearby Palapag. By 1750, a church was requested to be built in Laoang since the townspeople had to take long journeys to Palapag for their Sunday obligations.

The church, dedicated to the town’s patron San Miguel Arcangel, and convent were built of rubblework in 1767 or 1768. The church was erected on a promontory overlooking the Laoang Bay, now known as Barangay Guilaoangi, which developed as the nucleus of the pueblo. Delgado writes that in the late 18th century, a fort was built in this area below the convent and church, but it is uncertain whether the structures were made of wood or stone, or if the church is the same one existing at present.

Upon the expulsion of the Jesuits from the Philippine Islands in 1768, the Franciscans took over the administration and established the parish with the same titular patron saint. Based on Redondo’s analysis of the oldest parish records in 1886, the probable year of the foundation of the parish was 1733.

Along the church vicinity, a fort and protective wall were constructed in 1814 as part of the defensive plan ordered by the governor-general to prevent Moro pirates who were plundering the coastal towns of Samar then. Lauang Church!

Fr Jose Mata, parish priest of both Laoang and Palapag, was cited for being the first to have launched the construction of the muralla or wall made of cobblestones, at his own expense. The Almuraya Fort, which stood above the cliff west of the Church, was used as a watchtower by the natives to warn authorities of the coming Moro pirates. Both the fort, now in ruins, and the muralla defended the rear and flanks of the church from the Moro invasions.

From 1848 to 1852, the church and convent were rehabilitated after a major earthquake damaged the structures extensively during the term of Fr Manuel Lozano, OFM. His successor, Fr Sebastian Almonacid, OFM, undertook rehabilitation of the damaged structures, and had the roof of both structures renovated, although conservatively, to preserve the original fabric. The major renovations and additions were made on the church in ca 1855 during the term of Fr Angel Pulido, OFM. A baptistry was added to the nave, both church and baptistry were paved with azulejos (glazed blue tiles), the altars regilded, and the bell tower constructed. By 1900s, this bell tower would be ruined, and then repaired in 1926.

In 1982, during Christmas Day, the baroque altar, which was as old as the church itself, was destroyed when a strong typhoon ravaged the town and unroofed the church. The reconstruction committee, headed by Fr Nicodemus Ricalde, was forced to sell the remaining pieces of the altar in order to fund the renovation of the church’s roof. Laoang Church.

Through the years, the renovations on the fabric became apparent: entrances to the transept were modified, and an independent structure parallel to the epistle side of the nave was demolished to make way for an expanded convent. The baptistry was demolished, and the walls of the old church were transfixed with new doors. The National Museum of the Philippines would assist the parish in adding ambulatory annexes to accommodate the rapid growth of parishioners. The church has survived fires and earthquakes, and to this day there has been a constant restoration effort led by Msgr Balerite. Lauang Church!

The church’s walls are made of cobbled stones, two meters thick, with two side altars forming a cruciform with the baroque retablo at its head. The main facade is graced by the statues of San Pedro and San Pablo, and at the top is the statue of the patron saint of Laoang, San Miguel Arcangel. Above it rests the image of the Blessed Virgin Mary.

If the church was built by the Jesuits, then the facade presents a variation of the San Ignacio-type facade. “The divisions between horizontal are softened by the retablo-like structure that connects a central niche bearing the image of St Michael with the lower members. Scrollwork decorates the otherwise austere pediment.” Lauang Church!

Beside the church, and between the two modern structures of the municipal hall and the Laoang police station, also lies another architecture of interest—the Pergola, a cobblestone arch built in 1894 as part of the old Casa Tribunal (Justice Hall). Two Spanish-era cannons sit beside the arch. It is a cobblestone arch reminiscent of Spanish architecture. It was used as a passageway to the defunct Casa Tribunal replaced by a present day municipal hall, built in 1894 by then Gobernadorcillo Don Juan T. Mulleda.

The Church of Laoang was given a historical marker by the National Historical Institute in 2009, and was classified as a local historical landmark because the external architecture of the structure was preserved, even if the original interior was altered. In 2013, the Subcommission on Cultural Heritage of the National Commission for Culture and the Arts visited Laoang and identified five key locations that needed heritage conservation, namely, the San Miguel Arcangel Parish; Almuraya Fortress Ruins; the Muralla (wall); the Grand Canyon; and the Pergola. Lauang Church!