Jaro, whose name is said to have been a hispanized form of the old name Salog, was made a visita (mission chapel) in 1575—first under the administration of the Augustinians in Oton, then under the parish of Arevalo. It was made an independent parish in 1587. The town was relocated a few times until the early 18th century, and so had as many churches as there were transfers. Its residents supported themselves through farming. The town’s industries and trade, however, merged with those of Iloilo.

A church was begun in the 1720s, to be replaced by a sturdier one whose construction started in the 1740s. More building activity was undertaken in the 1820s and 1830s to repair damage sustained from an earthquake in 1787. During this time a brick kiln was built at the site. The last Augustinian parish priest of Jaro Francisco Agueria embarked on plans for another church, and gathered bricks, wood, and other material for the construction. In 1865, however, Jaro was chosen as the seat and cathedral of the newly created Diocese of Santa Isabel. Thus, the Augustinians turned over the parish to the seculars who, under the first bishop of Jaro Mariano Cuartero, effected Agueria’s plans. Only the bell tower in front of the church and the church plans were by Augustinians; the rest of the building was undertaken by the seculars. 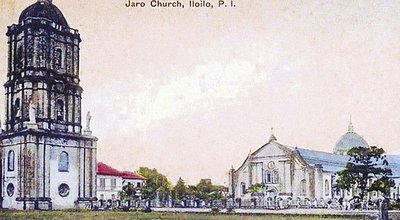 Its facade is dominated by a pair of pilasters flanking the main entrance. Over the doorway are the twin arched windows, the only hint of Romanesque influence. In the central niche is the rare polychromed coral-stone image of Nuestra Señora de Candelaria. A pair of unattractive and stylistically inconsistent spires has been built behind the facade in recent times. Another addition is a concrete balcony flanked by stairs over the main entrance, which effectively defaces the original facade.From this balcony, on 20 February 1981 then Pope, now Saint John Paul II, canonically crowned the image of Nuestra Señora de la Candelaria.

The church’s brick walls create interesting contrasts with the architectural supports of cut limestone. This technique was utilized in other churches and residences in western Visayas. The cathedral follows the basilican plan.

The freestanding bell tower is one of the very few in the Visayas. This type is more commonly associated with Ilocos churches, although some examples may also be seen in Bohol. The Jaro bell tower is exceptional for another reason: apart from being separated from the church, it stands at the center of the plaza in front of the church. Such arrangement is unique in the Philippines. The bell tower’s upper stories were toppled in an earthquake of 1948 but these were rebuilt in the 1990s with reinforced concrete and later in 2012, with assistance from the Tourism Infrastructure and Enterprise Zone Authority (TIEZA).

The bell tower was declared a National Historical Landmark by the National Historical Institute in 1984. Not far from the belfry is Jaro’s old prewar art deco municipal hall which is now the National Museum Iloilo office. The cathedral, together with the Jaro Plaza Complex, the Molo Church, Molo Plaza Complex, Iloilo Central Business District, Fort San Pedro, and Plaza Libertad Complex, were declared as Cultural Heritage Tourism Zones through Republic Act No 10555 in 2013.