In the Philippines, Duterte poses a crucial Catholic conundrum

ROME — By conventional political standards, President Rodrigo Duterte of the Philippines has to be considered a formidable, and basically successful, leader. After almost five years in office, and despite the coronavirus pandemic, the worst economic contraction in his country since World War II and the scorn of both human rights groups and the international community, Duterte remains wildly popular, with one recent poll putting his approval rating at an astonishing 91%.

So strong is his position that many Filipinos are urging Duterte to run for vice president when his six-year term ends in 2022, with his daughter at the top of the ticket, in order to keep the dynasty in charge. Another option for a successor (albeit temporary) would be popular Sen. Manny Pacquiao, a former world champion boxer and Duterte ally.

The fact that Duterte has accomplished this as the leader of arguably the world’s most pervasively Catholic nation, while pursuing policies clearly at odds with Catholic teaching on multiple points, can’t help but pose an examination of conscience for the Filipino church.

Duterte is a Trump-esque nationalist, populist, and maverick, whose signature policy is a crackdown on crime that’s produced, according to most estimates, something on the order of 30,000 extra-judicial killings of drug traffickers and other criminals so far.

He has launched a war on supposed corruption, floated a massive infrastructure investment plan, and sought to distance the Philippines from the United States and the European Union in foreign policy in favor of closer ties with China and Russia. He’s also strongly backed the reintroduction of the death penalty in the Philippines, once vowing to “litter Manilla Bay with the bodies of criminals.”

Duterte, in other words, is precisely the sort of political leader that’s anathema to Pope Francis and a broad swath of the Catholic hierarchy.

From the beginning, bishops in the Philippines have been his most determined critics. In a 2019 pastoral letter, the Catholic Bishops Conference of the Philippines denounced Duterte’s “war on drugs,” and not long afterward the country’s Department of Justice actually charged four Filipino prelates with sedition (those charges were later dropped.)

The Archdiocese of Manila adopted the custom of ringing church bells every day at 8 p.m. for five minutes as a sort of audible protest against the killings under Duterte, believed at their peak to have reached roughly 1,000 per month.

For his part, Duterte, who’s never going to win any international prizes for diplomacy, once defined the country’s hierarchy as “useless fools” and suggested they should all be killed. In January 2020, he declared victory in his personal “war on the church,” among other things, pointing out that despite overwhelming criticism by Church leaders when he ran for president in 2016, he still won in a landslide.

All this makes Duterte an anomaly, because at the grassroots level, the Philippines is in-your-face Catholic. It’s the third largest Catholic country in the world, after Brazil and Mexico, and its levels of faith and practice are comparatively high, with weekly Mass attendance at about 40% of the Catholic population. We’re talking about a country where public office buildings and even shopping malls have chapels, and where street signs in downtown Manila actually read, “Caution: Masses and processions always in progress.”

Moreover, the Philippines is also a society in which Catholic leaders typically enjoy considerable political heft. The legendary Cardinal Jaime Sin was the spiritual leader of the 1986 People Power revolution that brought down the regime of strongman Ferdinand Marcos, for whom Duterte repeatedly has expressed admiration.

It’s a question that must be haunting Filipino bishops today as to why the country followed their lead 35 years ago in sweeping aside one dictator, but it seems largely content with another dictator today regardless of what the Church has to say.

In an effort to change that calculus, two prominent Catholic clergy in the Philippines, De La Salle Brother Armin Luistro and Jesuit Father Albert Alejo, recently joined the conveners of a new political force called “1Sambayan.” The term is an amalgamation of three words in Tagalog, a native language in the country, which, taken together, mean something like “a united country in prayer.” 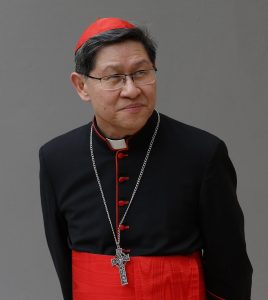 The stated aim of “1Sambayan” is to identify candidates for national elections in 2022 who will support a radical break with the policies and philosophy of the Duterte years. The group is headed by a former Supreme Court justice and a former foreign minister.

“If you are quiet, if you don’t make a stand against brazen killings … you have no part in this because you are one of those who support the killings,” Father Alejo said, who’s previously called Duterte a “serial killer” for his violent anti-crime crackdown.

The ability of the Church to mobilize anti-Duterte opposition may have been slightly compromised last year, when Pope Francis brought Cardinal Luis Antonio Tagle of Manila to Rome to head the Vatican’s missionary congregation. Cardinal Tagle is by far the most popular and prominent prelate in the country, and he too had a reputation as a Duterte opponent, having famously declared, “We cannot rule the nation with homicides.”

On the other hand, Cardinal Tagle is also known for a soft, gentle personal disposition and a preference to avoid conflict, and perhaps the thought was that a slightly different approach is needed headed into next year’s election cycle. On March 25, the Vatican named his replacement: 69-year-old Cardinal Jose Advincula of Capiz, known as a vocal advocate for human rights during his time leading the smaller diocese of Capiz.

Whatever the case, Duterte is perhaps the most flagrant example on the world stage today of a leader who’s made a career of defying Catholic social teaching, his own country’s bishops, and the personal witness of the pope. How Filipino Catholics pick up the pieces from here will have enormous consequences, and not just for their own country, but for all those corners of the Catholic world today shaped to a large extent by Filipino expatriates and missionaries.

Activism and the Catholic Church – The Manila Times