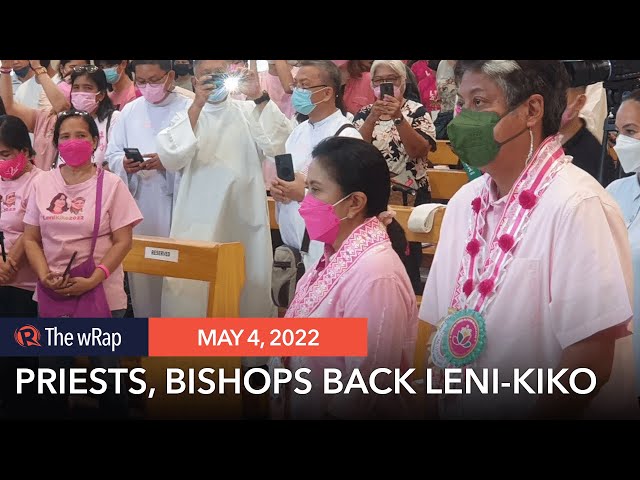 At a press conference on Wednesday, May 4, the Clergy for the Moral Choice (CMC) made the appeal to Filipinos “to remind them gently yet firmly of their sacred duty to vote and to vote only for the right leaders of this our beloved country, the Philippines, to choose and to elect true servant-leaders whose hearts are really after the heart of the Good Shepherd – just like Leni and Kiko.”

(We’re not progressing. If we want to our country to progress, we need to choose the right leaders. We can’t just always opt for the lesser evil. The church has to make a stand.)

The late dictator’s son has been leading the pre-election voter preference surveys with Robredo trailing behind him by a wide margin. In the latest Pulse Asia survey, Robredo’s voter preference was steady at 23%, while Marcos Jr.’s voting preference stayed at 56%, keeping with his numbers from the March survey.

In an interview with DZMM’s TeleRadyo on Wednesday, Pulse Asia president Ronald Holmes said that voter preferences can still change. He said that the ongoing house-to-house campaigns can still be a game changer of the election results on May 9. (READ: The Pink Wave: Robredo’s volunteer movement defies traditional campaigns)

On April 23, Robredo staged her biggest campaign rally so far, drawing 412,000 “kakampinks” in Pasay City. Over 50 of some of the biggest names in the Philippine entertainment industry, including popular comedian Vice Ganda appeared onstage and endorsed Robredo. (READ: Robredo’s marching orders to 412,000 in Pasay: Open your hearts, fight fake news)

Holmes also said that the elections now is so much different from past elections. This is also the first time that the Philippines will hold elections in the middle of a pandemic. – Rappler.com