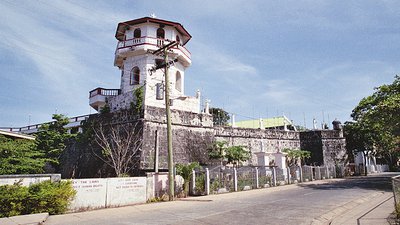 In 1622 the parish of Cuyo was founded by the Augustinian Recollects on the island of the same name. It was their first landfall in the island district that was then known as Calamianes, and now as the province of Palawan. Sent by the Dominican Pedro Arce, bishop of Cebu, were the Recollects Francisco de San Nicolas, Diego de Santa Ana, Juan de Santo Tomas, and a lay brother Francisco de la Madre de Dios. The first church to be built in the province was that of Cuyo. Other churches were later built in towns organized by the friars: Agutaya, 1622; Taytay (on Paragua, now Palawan, island), 1622, with a fort built in 1626; Balabac, 1861; Parawan, Dumaran, and Linapacan, 1861; and Busuanga, 1868.

Cuyo served as the first capital of the district. A stepping stone linking the Calamianes Islands with the Visayas and Luzon, its strategic position within a transportation and trade route made it imperative that it be fortified.

In 1752, the Recollect provincial wrote a memorandum to the king of Spain informing him of the various hardships suffered by the missions because of slave-raiding attacks within his jurisdiction. In 1751 and 1752, pirates killed 489 Christians and ravaged the towns of Catalan, Palawan; Sabili in Maestre de Campo Island; Caolo, Sapao, and Cabonto in Siargao Island; and Bongabon, Dongon, and Basig in Mindoro. Attacks by slave-raiding bands beginning the previous century—in 1602, 1626, 1632, 1636, 1638, 1640, 1645, 1646, 1650, 1652, 1658, 1666, 1667—convinced the Recollects that it was necessary to build fortresses at the expense of their order, without any financial aid from the government. The Recollects built eight stone fortresses equipped with arms, bullets, and gunpowder in Cuyo, Agutaya, Taytay, Culion, and Linapacan in Palawan province; in Romblon and Banton islands; and in Mobo, Masbate. Maestros de campo or field chiefs, captains, lieutenants, and other officials drawn from the native population were all appointed by the crown but supervised by the parish priest.

Built in 1683, the fortified church of San Agustin in Cuyo is the work of the Augustinian Recollect Juan de Severo. He was also responsible for the fortifications and churches on the islands of Agutaya and Culion, also in 1683. The next major renovation to the Cuyo fortification was in 1827 when a bell tower was built on top of one of the fort’s bastions.
The Cuyo fort has been variously described as quadrilateral with bastions at the corner, a stone church with stone fort and a baluarte, or a fortaleza. The plans in Gov-Gen Fernando Valdes y Tamon’s 1738 report present the fort as a quadrilateral; most likely this is the plan as projected but not the plan as built. In fact, the fort is an irregular pentagon. Because of its military nature, the church formed one side of the fort and the convento, parallel to the church, another. Curtain walls connect these two structures. The fort’s main entrance is through the church door, placed slightly off center of the nave’s centerline. Atypically, the front curtain wall does not describe a straight line but comes to an apex, where there is a secondary entrance to the fort. This entrance does not lead directly into the fort but into a blind enclosure, apparently a type of trap to catch invaders off guard. A ravelin with two gates used to stand guard before the main entrance.
Bastions are found at four corners of the pentagon. The landward bastion at the gospel side of the church forms the base of a bell tower built in 1827. The remaining three bastions have garitas (guardhouses). During pirate attacks, the townspeople, who lived outside, rushed to the fort and from there waged their defense. Many dwellings were also found within the fortification walls, which have recently been restored.
Old photographs show the convento built parallel to the nave. Records have it that the convento was renovated from 1918 to 1920. Most likely this is the present convento at the rear running perpendicular to the church. The 1922 convento was repaired and renovated in 1995.
At Lucbuan on the eastern shore of Cuyo, there is another quadrilateral fortification. Details about its construction are unknown, though it may date from the 1890s. The fort is greatly degraded and its walls are much reduced in height.