ASIA/PHILIPPINES – Catholic cemeteries welcome the victims of the pandemic, of any religion 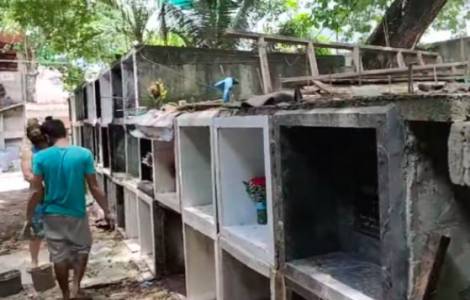 Manila (Agenzia Fides) – The Archdiocese of Cebu, in the central Philippines, has decided to welcome in its Catholic cemeteries the bodies of people, of any religion, who have died as a result of the pandemic. As communicated by the local Church, Archbishop Jose Palma thus intended to help non-Catholics due to the increase in deaths caused by the coronavirus in the province of Cebu, given that citizens cannot find spaces for burial in public cemeteries. “It as an act of charity to allow their burial in our Catholic cemeteries during this time of pandemic”, said the Archbishop.

Cebu City Council reports that there is still a need for burial spaces in the city, even though the city has seen a significant decline in severe Covid cases and deaths in recent days. The civil community greatly appreciates the fact that four main cemeteries dependent on the Archdiocese of Cebu have been made available to the local government to build new graves. The Archdiocese confirmed the decision to provide the city government with special square spaces in the cemeteries of Cabantan, Carreta, Talamban and Calamba.

“Charity knows no boundaries. It seems to me a significant gesture of solidarity towards the poorest and of respect for life and human dignity. This decision of the Church to open Catholic cemeteries to others reflects the true Christian spirit”, comments to Fides John Lerry Merrono, Catholic lay leader.

Archbishop Jose Palma, speaking in recent days at the 52nd International Eucharistic Congress in Budapest, underlined the spirit of the choice: “being a family”, which the faithful experience every time the Eucharist is celebrated. “At the beginning of the Mass, we leave our social status and the many things that divide us, to become a single family of believers. In each Eucharist we abandon our titles and call each one as brothers and sisters, asking the Lord that my sacrifice and yours be acceptable to the almighty Father”. This spirit of family and fraternity, he said, must be extended to all humanity as a gift, especially in times of suffering and poverty. (PA) (Agenzia Fides, 11/9/2021)