ASIA/MIDDLE EAST – Election of the new patriarch: Armenian Catholic bishops will meet in the Vatican from September 20th 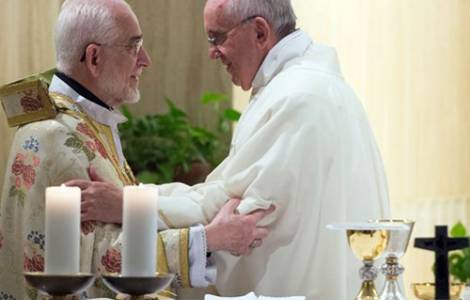 In fifteen days, no candidate obtained two thirds of the votes of the twelve bishops participating in the Synod, the threshold required to be elected successor of Patriarch Krikor Bedros XXI Ghabroyan, who died last May 25 (in the photo, during the Eucharistic concelebration with Pope Francis, ed). Therefore the meetings of the electoral synod had been interrupted in accordance with the canon of the Eastern Churches and the matter had been referred to the Pope. “Now we will meet again on September 20th at the Pontifical Armenian College in Rome for a two-day spiritual retreat. From September 22nd, the Synodal Assembly for the election of the new Patriarch will begin. It will be chaired by Cardinal Leonardo Sandri, Prefect of the Congregation for the Oriental Churches”, explains Archbishop Marayati.

As for the procedure for electing the Patriarchs, the first paragraph of Canon 72 of the Canonical Code of the Eastern Churches states: “He is elected who obtains two-thirds of the votes, unless particular law establishes that after an appropriate number of ballots, at least three, an absolute majority of the votes suffices, and the election is to be conducted according the norms of can. 183, §§3-4”. The second paragraph of the same canon 72 makes it clear: “If an election is not successful within fifteen days from the opening of the synod of bishops of the patriarchal Church, the matter devolves to the Roman Pontiff”.

Should the Synod of Bishops of the Armenian Catholic Church not end with a clear election again, the positive result of the electoral assembly would, however, be guaranteed by a series of exceptions, which would make it possible, after a certain number of unsuccessful votes, to elect the candidate as Patriarch who achieves an absolute majority (half plus one) of the votes cast. If there is no election, the candidate who receives the relative majority of the votes cast will be elected Patriarch. Finally, when two candidates get the same number of votes, the most senior bishop by priestly ordination will become Patriarch. (GV) (Agenzia Fides, 28/8/2021)